What does THAT mean? Trump says US ‘secured the oil’ in Syria, causes confusion — RT World News 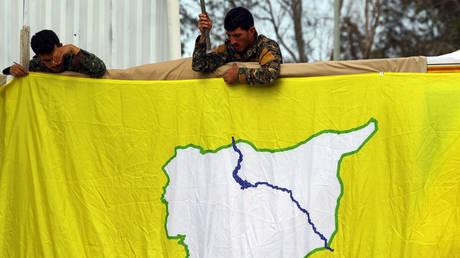 President Donald Trump’s claim that the US has “secured the oil” in Syria has set Twitter on fire, from speculation he will keep troops there to accusations he was only ever interested in oil rather than fighting terrorism.

Praising the ceasefire negotiated with Turkey on Thursday, Trump tweeted that everything was going well, adding that captured Islamic State (IS, formerly ISIS) terrorists were “double secured” by Turkish and Kurdish forces, but “the US has secured the oil.”

…..this thinking years ago. Instead, it was always held together with very weak bandaids, & in an artificial manner. There is good will on both sides & a really good chance for success. The U.S. has secured the Oil, & the ISIS Fighters are double secured by Kurds & Turkey….

Journalists, pundits, think-tank experts and the president’s critics in general have zeroed in on that “curious element” in the thread, wondering what it might mean – or mind-reading their own conclusions into it.

Nicholas Heras of the liberal think-tank CNAS suggested this might mean the US is keeping a “residual force” in the Middle Euphrates River Valley, contrary to earlier reports that all forces would be withdrawn except for a small garrison at At-Tanf on the border with Jordan.

Washington has kept a small number of special forces operators in Syria for the past several years – against international law and stretching the US legislation authorizing military action abroad – with the purpose of leading Kurdish militias against IS.

Given that I’m a retired US Intelligence officer, I’m very familiar with Middle Eastern oil fields.

What oil fields in Syria has the US secured? Show me THAT oil, the SYRIAN oil secured by the US. Show me that. https://t.co/YfYozaj1tC

Territories liberated by these “Syrian Democratic Forces” included much of Syria’s farmland and oil fields east of the Euphrates, which the US refused to turn back over to the government in Damascus.

As Turkey invaded northern Syria last week to go after the Kurdish militias it has declared terrorists, the Kurds reportedly struck a deal with Damascus for government forces to move back in to the border. It stood to reason that this would apply to the oilfields and the rest of the territory in the interior as well, whether now or a little bit later.

Also on rt.com
About 166,000 Syrians displaced over past 7 days because of hostilities – UN

Trump’s tweet opens up the possibility that some US troops will be staying behind to prevent this from happening, although that does not fit with the general withdrawal orders confirmed by the Pentagon earlier. Far more likely is that he was referring to oilfields previously used by IS to funds its “caliphate,” that are now safely in the hands of local forces opposed to them. No one but Trump himself actually knows, however.