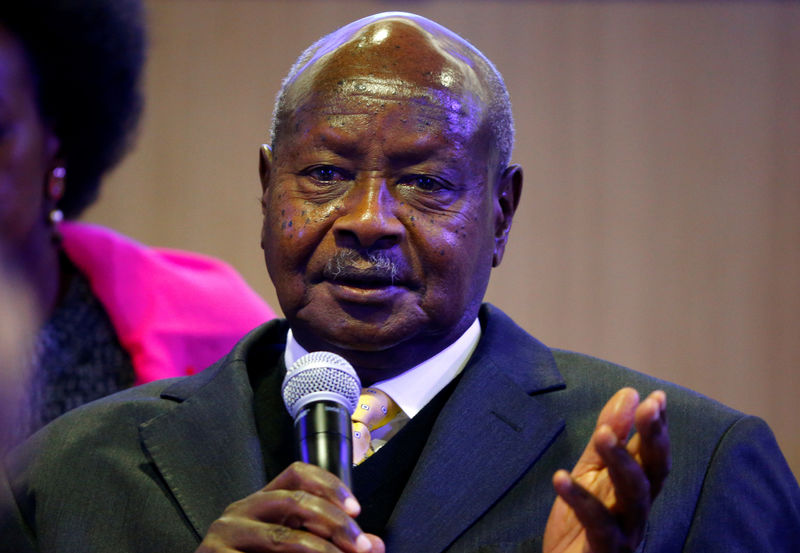 KAMPALA (Reuters) – Uganda’s President Yoweri Museveni has said he wants courts to hand out eye-for-an-eye-style sentences for all murder convicts, to help stem soaring violent crime that claimed the life of his nephew last week.

From killings to violent robberies and kidnappings for ransom, crime has been surging in recent years in the East African country, stoking widespread public anger.

Ugandans complain that most crimes go unsolved because police are corrupt and not interested in investigating cases involving ordinary citizens, although security officials deny this.

“We need to work on the courts,” Museveni said in a statement posted on his official social media accounts late on Tuesday.

“They need to move quickly on the cases of murder…the punishments must also be severe, including the hanging of killers.”

The ruling National Resistance Movement (NRM) party, he said, believed in a justice system that extracts ‘an eye for an eye and a tooth for a tooth’.

“We need to make this clear to the courts. It must be an eye-for-eye,” Museveni said. “Nothing less will be acceptable.”

Death is the maximum penalty in Uganda for a range of crimes including murder, treason and defilement, but executions are rare.

On Aug. 30, the bodies of a woman working for a local non-governmental organization and her driver were found dumped in a swamp just east of the capital Kampala, two days after they were kidnapped in their own vehicle outside the gate of the woman’s home.

Museveni blamed the deaths of the NGO worker and her driver partly on the negligence of police officers who, he said, had not acted swiftly to use a recently installed CCTV system on all Kampala roads to intercept their vehicle and rescue the victims.

Police who were negligent, he said, have been arrested and he has ordered that they be tried and dismissed.

“If those who are in uniform today cannot do their job, there are plenty who will replace them.”

Why John Bolton had to leave and what to expect next