Breaking News
How to Stay Focused When Planning and Hosting...
How You Can Know if You Really Need...
A Close Look at the Top Uses and...
Startup Business Management: How to Effectively Avoid Common...
4 Steps to Taking Your Event Outdoors
Questions to Ask When Interviewing Potential Physicians for...
Cider-Braised Chicken & Mushrooms
Deadline extended for 100 Best Places to Work...
Trump impeachment: Senate leaders spar over trial
Trump faces impeachment on a grave day in...
Home World Trump’s long-term plan to destroy Obama’s green legacy
World 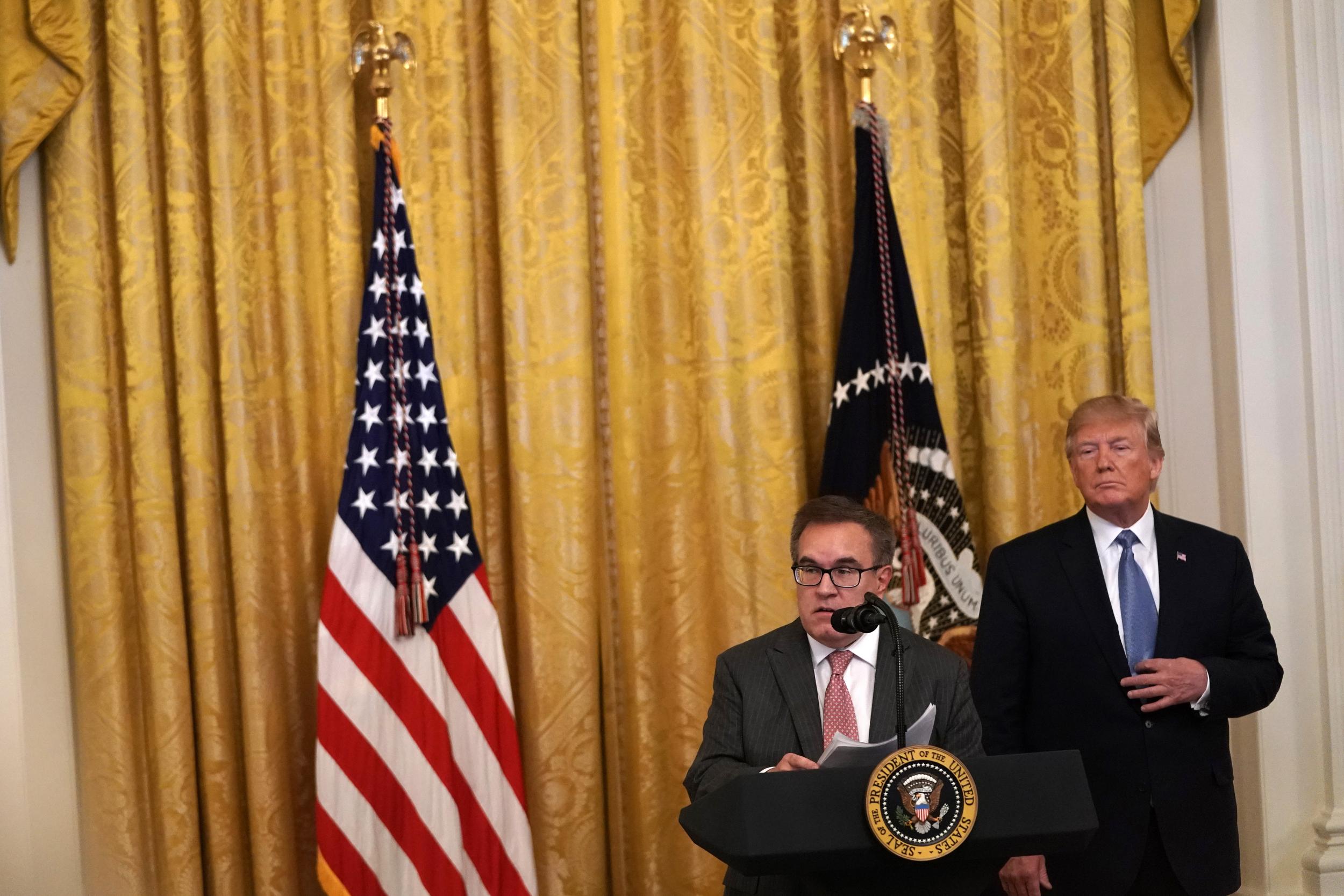 In the first hour of Donald Trump’s presidency, the newly appointed administration wiped Barack Obama’s administration’s climate and energy pages from the White House website, replacing them with the America First Energy Plan, which mostly focused on “clean coal”.

A few weeks later, the EPA’s website was stripped of any mention of climate change at all. Activists across the country panicked, but as the Trump administration began its hectic reign, their outcry was largely ignored in the wake of other devastations. Now, two and a half years into president Trump’s first term, they may feel their fears have been justified: Mr Trump has rolled back or attempted to roll back 85 environmental regulations, effectively dismantling the strides made by the Obama administration.

The changes were expected even before the website warning – Mr Trump has long disputed the existence of climate change, on one occasion suggesting it was a Chinese hoax But the former real estate man also vowed during his candidacy to run the United States as he would a business. And that promise he’s kept. Openly disdainful of the Environmental Protection Agency, Mr Trump has seen business opportunities in every part of the country, from air to endangered species to national parks.

This week, the mark was America’s water. On Thursday, the Trump administration rolled back the 2015 Water of the United States (WOTUS) regulation, which enhanced protections by defining what bodies of water belong to, and are thus under care of, the US.

Claiming that Obama-era rule costs “hundred of thousands of jobs” without any evidence to suggest it had, the administration has replaced the protection with a regulation that allows them to decide which waters deserve federal protection. Almost immediately after EPA administrator Andrew Wheeler announced the rule, the director of federal water policy at the Natural Resources Defence Council vowed to fight it in court.

Mr Wheeler, who’s headed the EPA for a long time by Trump standards, is a former lobbyist for the coal industry, whose leaders have been some of Mr Trump’s most vocal supporters. The respect is is mutual. In June, after issuing the Affordable Clean Energy rule, a major rollback of the Obama administration’s climate plan that effectively extended a lifeline to the dying industry, Mr Wheeler said that the Trump administration is committed to ensuring that “coal plants will be a part of out clean future”, which most climate scientists agree is impossible.

As with the WOTUS rule, health groups immediately filed a lawsuit against the EPA, following a consistent pattern with the Trump administration’s rollbacks. In cases like their diminishing of rules protecting people from asbestos, unclean water, pollution, or endangered species in general, environmental and public health groups have taken legal action as soon as possible.

Caitlin McCoy, a climate, clean air, and energy fellow at the Harvard Law School Environmental and Energy Law Program who keeps track of the Trump administration rollbacks, says these lawsuits are kind of the point.

“The Trump administration is trying to transform our fundamental environmental laws like the Clean Air Act and Clean Water Act by proposing new interpretations of the laws, through these new regulations, that dramatically limit EPA’s authority, and the authority of states in some cases as well,” she told The Independent. “They know these rules will be challenged in court and they are hoping that their interpretations will be upheld. If these interpretations are upheld by the courts, EPA will have far less authority to take action in these key areas related to climate change, public health, and the environment in the future.”

She points to an upcoming rollback concerning auto pollution, which the auto industry itself has made clear they do not want. Mr Wheeler has also acknowledged that the final rules, once through the court battles, won’t go as far as initially proposed. But the administration is still pushing forward with the rulemaking process, subjecting themselves to litigation and fights with the auto industry and state of California, to reduce only a small amount of the regulations they’re against.

Ms McCoy says the push is part of a long-term goal.

“Their eyes are on California’s waiver under the Clean Air Act and its authority to set more strict Greenhouse Gas (GHG) Emissions standards than the federal government, and the ability of other states to follow California’s standards,” she says. “The administration is proposing a new interpretation of the Energy Policy and Conservation Act to pre-empt California’s waiver and a new interpretation of the Clean Air Act that will no longer allow other states to follow California’s GHG standards, even if California is able to keep them by winning in the litigation.”

In other words, they’re thinking ahead on climate – but not in the way the majority of Americans are asking them to.

While the world faces the existential crisis of climate change, the Trump administration and its allies are focusing on a different long-term plan: making it harder, long after they’re gone, for everyday people to find protection from powerful industries.

“The administration has learned from their own experience undoing the Obama administration’s regulations and is seeking to harden their rollbacks by changing how the underlying statutes are interpreted,” Ms McCoy said. “They are seeking to change EPA’s authority long term so that it is not about individual rules that can be undone as easily as the Obama-era regulations. The current administration wants to significantly change the environmental legal landscape so that it would take revisions of the federal statutes themselves to restore EPA’s authority in key areas.”

Jonathan Levenshus, the director of federal campaigns for the Sierra Club Beyond Coal Campaign, pointed to an even more extreme proposed rollback as an example of the harm the administration seems willing to inflict in order to grab at future gains. Since 2018, the Trump administration has been trying to roll back the 2011 Mercury and Air Standards Rule, which limits hazardous pollution from coal-burning and oil-burning plants. Mr Levenshus called its rollback a “direct attack on women and children”, claiming that it would have a disproportionate impact on lower-income families and people of colour.

“It would save 11,000 people a year,” Mr Levenshus said of the rule. “The Trump administration is proposing we throw that out the window.”

“I think they want to rewrite the entire process for conducting the way we determine the cost and benefit of our health standard,” he continued. “That move would invalidate the entire basis for Clean Air Act rules. Not only would Americans be less protected, but you’d have blocked ways for the EPA to use these rules in the future. They’re looking to rewrite the way we assess cost benefit analysis.”

He notes that economically – that is, in the language this administration supposedly speaks – these rollbacks will do more harm than good.

“The benefits are usually underestimated, and far greater from what EPA would calculate,” he said, noting that prioritising public health leads to better education, longer lives, and healthier workers – all things that build a stronger economy.

Still, Mr Levenshus says he’s hopeful that this version of the EPA won’t be as successful as the president imagines.

“The record of the Trump administration and their efforts to weaken these standards are really no match for the law,” he says. “They continue to roll out these dangerous rollbacks, but they’re not winning. And I think that’s an important part of this story.”

After conquering smartphones, PopSocket sets its sights on beverages – TechCrunch