Breaking News
How to Stay Focused When Planning and Hosting...
How You Can Know if You Really Need...
A Close Look at the Top Uses and...
Startup Business Management: How to Effectively Avoid Common...
4 Steps to Taking Your Event Outdoors
Questions to Ask When Interviewing Potential Physicians for...
Cider-Braised Chicken & Mushrooms
Deadline extended for 100 Best Places to Work...
Trump impeachment: Senate leaders spar over trial
Trump faces impeachment on a grave day in...
Home Business Tokyo court clears former Tepco executives of negligence over Fukushima disaster By Reuters
Business 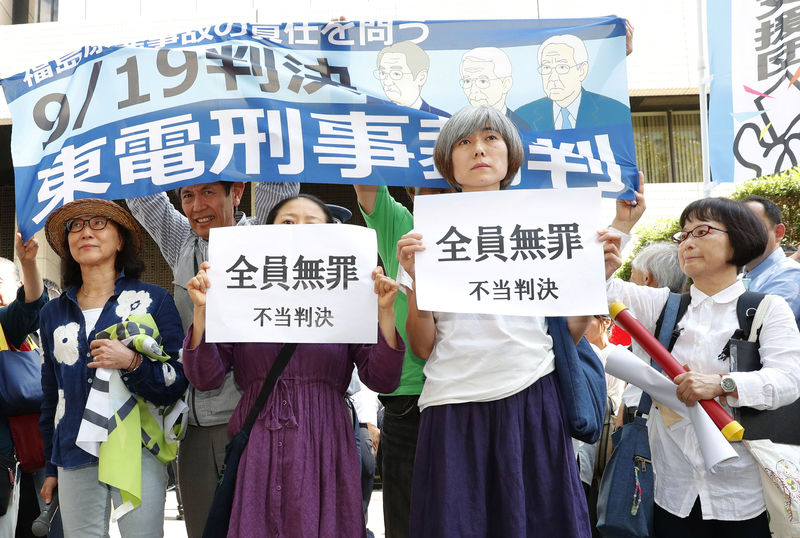 © Reuters. Women hold banners reading “Everyone is not guilty, unjust sentence” in front of Tokyo District Court in Tokyo


TOKYO (Reuters) – A Tokyo court cleared on Thursday three former Tokyo Electric Power executives of negligence for the 2011 Fukushima disaster, the only criminal case to arise out of the world’s worst nuclear crisis since Chernobyl in 1986.

Former Tepco Chairman Tsunehisa Katsumata and one-time executives Sakae Muto and Ichiro Takekuro were all found not guilty by the Tokyo District Court.

The trial, which started in June 2017, was conducted by state-appointed lawyers after prosecutors decided not to bring charges against the executives of the company known as Tepco.

The Fukushima Daiichi nuclear station, located about 220 km (130 miles) northeast of Tokyo, was rocked by a magnitude 9.0 earthquake and subsequent tsunami in March 2011, sparking three reactor meltdowns and prompting Japan to shut down its entire fleet of nuclear reactors.

A Drink a Day Might Be Good for Diabetics’ Health, Study Suggests