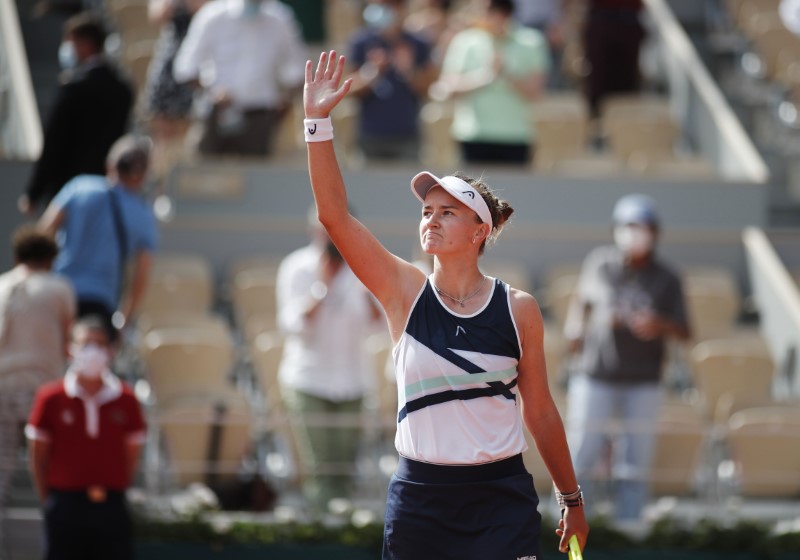 PARIS (Reuters) -Unseeded Czech Barbora Krejcikova completed a remarkable transition from a doubles specialist to a Grand Slam singles champion on Saturday by conquering Russia’s Anastasia Pavlyuchenkova in the final of the French Open.

The 25-year-old, a former doubles number one, defeated Pavlyuchenkova 6-1 2-6 6-4 to become the first Czech to lift the Suzanne Lenglen Cup since Hana Mandlikova, who represented the former Czechoslovakia, triumphed in 1981.

Krejcikova was languishing outside the top 100 before last September’s edition of the French Open – her preparations restricted to a series of ITF Circuit events back home – but a run to the fourth round in Paris changed her singles career.

Her preparations were much more solid this year as she won her maiden WTA title in Strasbourg in the run-up to Roland Garros. Following Saturday’s win, Krejcikova extended her winning run to 12 matches.

She entered Paris at a career-high 33rd spot and will further rise to 15th when the rankings are updated on Monday (NASDAQ:).

“It’s hard to put words together right now. I can’t believe what has just happened, that I’ve just won a Grand Slam,” said Krejcikova, who became a first-time women’s major winner in Paris for the sixth successive year.

After suffering the ignominy of numerous qualifying losses at the Grand Slams, Krejcikova won the ultimate prize in claycourt tennis in only her fifth main draw singles appearance at a major.

Krejcikova could walk away with even more silverware from Paris this weekend as she will be back on court on Sunday with fellow Czech Katerina Siniakova, with the duo attempting to win their second Roland Garros doubles title following their success in 2018.

The win will also see her reclaim the top doubles ranking.

On a sun-bathed Court Philippe Chatrier, Krejcikova and Pavlyuchenkova dominated a set each before the Czech surged ahead with a break of serve and completing the victory in just under two hours.

It was Pavlyuchenkova who started the final on a confident note, breaking the unseeded Czech at the start but that turned out to be the only game she would win in the opening set as Krejcikova reeled off six straight games.

Krejcikova started moving the Russian around by mixing her free-flowing, easy-on-the eye groundstrokes with deft dropshots, making it difficult for Pavlyuchenkova to settle down.

She got the break back in the second game with a forehand lob on the stretch that went over the head of an advancing Pavlyuchenkova and landed on the sideline with the Russian rooted to her spot.

Pavlyuchenkova tried to hang in on the rallies but did not find solutions to counter the Czech’s tactical game in the opening set but added a bit of aggression to her game in the second, jumping to a 5-1 lead in no time.

A niggle on the left leg, however, seemed to restrict her movement and after getting broken for 5-2 she received medical attention on court and had her thigh taped.

She broke Krejcikova’s serve after returning to court and got the match level at one-set all.

The players raised their level in the deciding set and the ferocity of the tennis increased. After an exchange of service breaks, Krejcikova managed to find an even higher gear to get another break for a 4-3 lead.

Krejcikova wasted two match points in the ninth game and another with a double fault at 5-4 up before Pavlyuchenkova sent a return long to end the contest.

There was some confusion over the line call and Krejcikova briefly paused not knowing if she should celebrate but after a hard look at the mark, she finally threw her arms up in jubilation before hugging her opponent at the net.

While her celebration was muted, she showed more emotion while paying tribute to the late Jana Novotna, who had been her mentor.

“Pretty much her last words were just enjoy and just try to win a Grand Slam. I know somewhere she’s looking over me,” Krejcikova said of the 1998 Wimbledon champion, who died of cancer in 2017.

“She was such an inspiration for me. I just really miss her. I hope she’s happy right now.”

Americans Are Willing to Take Pay Cuts to...

Some U.S. states turn to vaccine mandates for...