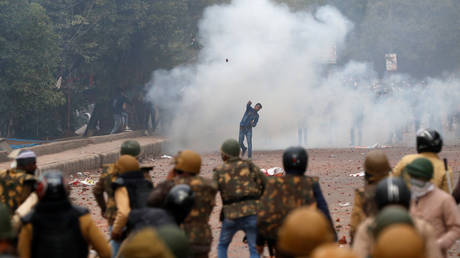 Police fired volleys of tear gas and detained several people after a massive protest got out of hand in East Delhi. The rally was sparked by a citizenship bill that was criticized as discriminatory against Muslims.

The rally, which started as a peaceful demonstration, spiraled into violent clashes around 12pm local time, when protesters began hurling stones and bricks at police. The rioters smashed cars and buses beside the road.

A video from the scene shows detained protesters being escorted across the barricades set up by law enforcement.

The standoff marked a renewal of violence in the Indian capital after intense rioting over the weekend.

The street battles are centered in the city’s Seelampur area, where seven metro stations have been shut down due to the unrest.

Survey: 50% of companies integrating AI into their workflows spend between 8 and 90 days deploying a single machine learning model, with 18% taking even longer (Kyle Wiggers/VentureBeat)