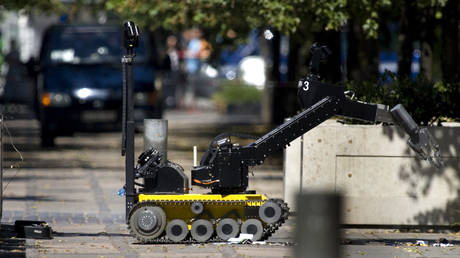 Police in Eksjo, Sweden received reports of a suspicious object outside a pizzeria, shortly after 3am local time Monday. A bomb squad robot was immediately deployed to investigate the threat.

“It’s some kind of explosive object,” a police spokesman said as officers established a one-block security cordon around the area. A nearby residential building was also evacuated as a precautionary measure.

A robot carried out a threat assessment before a bomb disposal technician was sent in. It took just 26 minutes to disarm the device.

A forensic examination of the scene was carried out and as of 9:44am local time the security cordon was lifted. Police are investigating who might have been behind the bomb and have classified it as “an attempt to cause havoc.”

Sweden has endured an unprecedented wave of bombings tied to the criminal underworld in 2019, with over 100 attacks registered in the past 12 months alone.

Also on rt.com
‘No equivalent internationally’: Swedish police chief at wit’s end over wave of bombings in the country

Golden Globes Nominations: What to Watch For