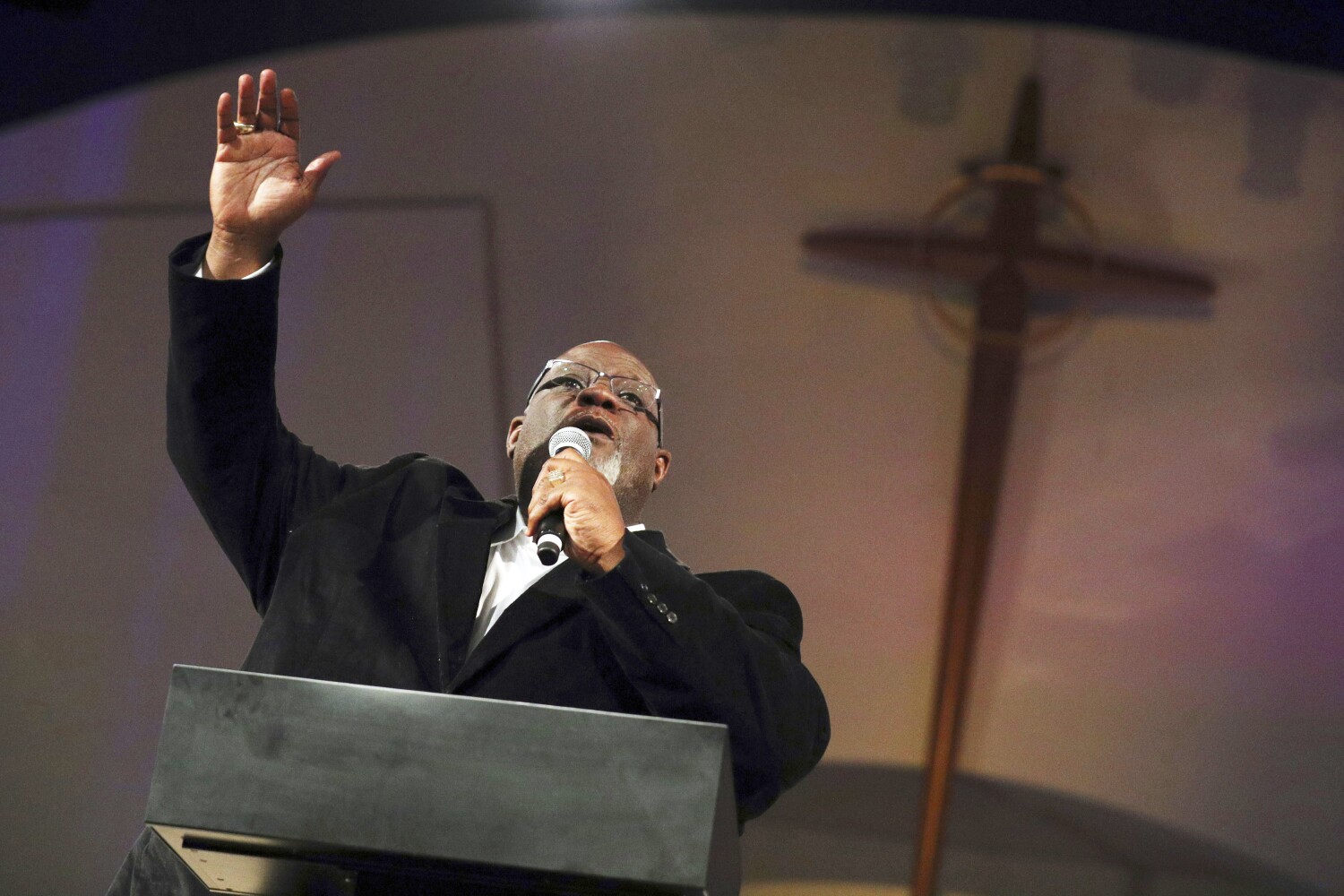 As thousands of members of the Southern Baptist Convention gathered in Nashville on Tuesday to determine the future of the nation’s largest and most powerful evangelical Christian denomination, the Rev. Dwight McKissic Sr. got ready to consign the group to his past.

The 65-year-old Black pastor in Arlington, Texas, who has been affiliated with the Southern Baptist Convention for more than four decades, boycotted the group’s annual meeting in protest of its handling of racial justice issues and invited more than a dozen Black pastors to his church to watch delegates pick a new president.

At a time when the nation is divided on how to challenge social injustices, the Southern Baptist Convention is facing a showdown on the direction of the evangelical movement with key battles over racial justice, the role of women and how to handle accusations of sexual abuse within the church.

A moderate establishment wing of Southern Baptists seeks to welcome Black, Latino and Asian congregations into the fold, adopt a moderate approach on social justice issues and tentatively uphold critical race theory, a concept that racism is structural and entrenched in modern society. But a growing faction of ultra-conservative evangelicals believes Southern Baptists have drifted too far to the left on issues of race and gender and seeks to counter what it views as a growing push to make Southern Baptists “woke.”

“This is a pivotal convention,” said Gregory Wills, a Southern Baptist historian and professor at Southwestern Baptist Theological Seminary. “There’s more polarization and conflict in the convention this year than there has been for at least 25 years.”

After months of controversy, more than 17,000 Southern Baptists registered for this year’s annual meeting — double the number that attended the 2019 gathering. On the eve of the convention, a wave of conservatives took to Twitter to declare their goal to #taketheship.

The struggle for the leadership of Southern Baptists comes as the leading evangelical denomination is losing members. Over the last 15 years, membership of the predominantly white group has declined from about 16 million to 14 million. But Black, Latino and Asian American churches have seen some growth and while younger evangelicals are still conservative, many are more liberal than their elders on social issues such as same-sex marriage, immigration and the environment.

In the last year, thousands of SBC churches have joined the Conservative Baptist Network, a new group of ultra-conservatives that calls for a reboot of the group’s 1979 conservative resurgence.

Their critics, meanwhile, warn that a lurch to the right risks splitting the evangelical movement and provoking an exodus of pastors. Instead, they argue, the group that aligned itself closely with former President Trump should seek to broaden Southern Baptists’ reach and step back from advancing an overtly Republican political agenda.

In a final address, outgoing SBC President J.D. Greear said the convention members were at a crossroads: After rising up against liberalism, he said, they risked making the Pharisees’ mistake of clinging too much to tradition and conflating the traditions of men with the commands of God.

The SBC, he said, should not create unnecessary obstacles for people who say they experienced sexual abuse to seek justice by hiding behind legal smokescreens and non-disclosure agreements. While he said many Southern Baptist leaders viewed critical race theory as coming from “a worldview at odds with the gospel,” he railed against those who expended more energy decrying it than “lamenting the devastating consequences of years of racial bigotry and discrimination.”

Already, a slew of pastors has parted ways from the SBC.

In May, Russell Moore, the president of the group’s Ethics and Religious Liberty Commission and a regular Trump critic, abruptly resigned. A few weeks later, letters were leaked in which he described a “crisis for the Southern Baptist Convention” and railed against the mishandling of sexual abuse accusations and the “blatant, gutter-level racism that has been expressed to me behind closed doors.”

In March, Beth Moore, a prominent white evangelical teacher and author not related to Russell Moore, said in an interview that she could “no longer identify with Southern Baptists.” Watching leaders unite around Trump after transcripts of the “Access Hollywood” tapes showed him boasting of his sexual exploits, she said, was just disorientating and “staggering.”

At the end of last year, the pastors of two predominantly Black megachurches — Charlie Dates of Chicago’s Progressive Baptist Church and Ralph D. West of Houston’s the Church Without Walls — left the organization after six white SBC seminary presidents issued a statement declaring that critical race theory and intersectionality were “incompatible” with the Baptist faith.

McKissic said he was ready to follow them Tuesday if the group elected an ultra-conservative leader, upheld a resolution against critical race theory or refused to address sexual abuse accusations within the organization.

“I think they’re tone deaf,” McKissic said of the Conservative Baptist Network. “America’s telling us, ‘We want inclusion, we want diversity. We want empowerment for all of God’s people’ … They want to take the Southern Baptist Convention back to the days of the Confederacy.”

Many pastors say the SBC has yet to fully grapple with its long record of racism.

Founded before the Civil War, when Southern Baptists split with northern Baptists over the issue of slavery, the SBC did not apologize for its support of slavery until 1995, when it resolved to “unwaveringly denounce racism” as “deplorable sin.”

Since then, there have been a few milestones. After electing its first Black president in 2012, the convention resolved to push for more Black leaders in the church, and decry “every form of racism, including alt-right white supremacy, as antithetical to the Gospel of Jesus Christ.”

In 2019, the convention affirmed that critical race theory could be a useful “analytical tool subordinate to Scripture” — a move that led to a backlash from ultra-conservative pastors.

A recent report from the group’s executive committee found that ethnic diversity in SBC committees increased in the last two years, with minorities making up more than half of Greear’s appointments to 2020-21 committees and 37% of the Committee on Nominations elected by delegates at the 2019 annual meeting.

All of the candidates for SBC president are white. While all are conservative in the sense that they are anti-abortion and against same-sex marriage, they differ on how to achieve racial reconciliation and navigate sex abuse allegations in the church.

Stone, a former chair of the convention’s executive committee, stands accused by Russell Moore of “bullying and intimidation” of people who say they experienced sexual abuse and thwarting the convention’s efforts to root out abusers. Stone responded June 5 in a video message, calling Moore’s letter “absolutely slanderous” and “inflammatory as it inaccurate.”

Another conservative candidate for the group’s presidency is Albert Mohler, the high-profile theologian, podcaster and president of the Southern Baptist Theological Seminary in Kentucky, who went from criticizing Trump to supporting him in 2020. Last year, he denounced critical race theory.

A third candidate, Alabama pastor Ed Litton, has pushed for racial reconciliation and argues that a drift to the right risks alienating young people and minorities. He has the support of Fred Luter, the convention’s first and only Black president.

For many pastors, historian Wills said, the leadership election appears to be a referendum on Trump’s approach to race relations and white supremacy.

“If Southern Baptists elect Mike Stone, I think many pastors are going to conclude that this means that Southern Baptists are not going to acknowledge that there is still a problem of racial injustice and racism in this nation,” he said.

Watching from Texas, McKissic said it would be hard to break from the group that helped him spiritually and financially over the years to turn Cornerstone Baptist Church from a tiny congregation in his garage to a thriving congregation of more than 3,000.

But increasingly he felt the relationship had become abusive. While SBC leaders had talked for 25 years about diversifying, he said he had watched them, over and over, choose not to hire minority candidates.

Already, everyone in his church was ready to break from the convention.

“The only somebody in my congregation who really probably wants to remain is me,” he said.

Deaths From Covid in Africa Are Rising as...