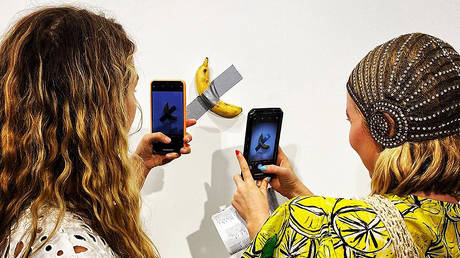 The art world is known for taking the mundane and turning it into something unique and beautiful, but netizens are struggling to justify the hefty $120,000 price tag placed on several bananas duct-taped to a wall.

The work ‘Comedian’ by the Italian artist Maurizio Cattelan is on display at Art Basel Miami in an exhibition run by contemporary art gallery Perrotin. According to Artnet, two of three editions have already been sold to two French collectors with the third now priced at $150,000, which will be sold to a museum.

“The banana,” explains Cattelan, “is supposed to be a banana.” The artist reportedly brought a banana with him and hung it on the wall in his hotel room to find inspiration. He also made several variations including one in resin, then in bronze before he eventually settled on the natural banana as a centerpiece, according to Galerie Perrotin.

However, he did elaborate a little further on the exorbitantly priced produce, describing bananas as a “a symbol of global trade, a double entendre, as well as a classic device for humor.”

The bananas were bought in a Miami grocery store and were affixed to the display wall with a single piece of duct tape. The artist has given no indication about what collectors are to do when the bananas begin to decompose.

Reaction online was almost entirely one of bafflement and shock at the massive price already paid for these bananas.

“This banana duct taped to a wall JJ’s sold for 120,000 at @ArtBasel there are literally NO WORDS for how f**king stupid this is. People are psycho. The art world is such bulls**t,” proclaimed one critic.

Not the last one, i got like 20 Duct-taped bananas ready to go. Offers on reply, starting… now.

If someone hasn’t duct taped a thousand bananas to the walls, stalls, storefronts and street lamps in and around the convention center by tea time, artbasel deserves to sink into the sea pic.twitter.com/zbjaoaxy4k

for added meaning please note that Chiquita Banana is an evil corporation.

This reference was more incisive than it may first appear, as Cattelan stole headlines previously when his piece ‘America’, an 18-carat-gold toilet, valued at around $6 million, was stolen in the UK. Five people have been arrested but the toilet has yet to be recovered.

Also on rt.com
Sitting on a gold mine? Thieves steal £1mn toilet from UK palace