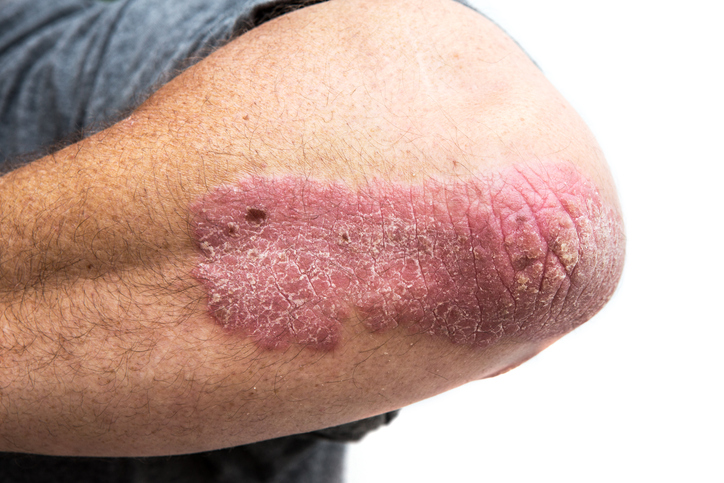 Psoriasis is a relatively common, chronic inflammatory skin condition. It is likely caused by genetic predisposition combined with triggers such as infections, trauma, stress, and medications. The classic presentation is itchy, scaly, pink plaques most commonly found on the elbows, knees, and scalp.

In a recent systematic review and meta-analysis of 58 studies published in JAMA Dermatology, researchers found an association between psoriasis and an increased risk of developing cancer.

The JAMA Dermatology study focused on data from previous studies analyzed between April 9, 2018, and February 22, 2019. The researchers found that people with psoriasis had an increased risk of developing cancers including colon, kidney, laryngeal, liver, lymphoma, non-Hodgkin lymphoma, esophageal, oral, and pancreatic cancers. They also found that people with severe psoriasis who developed cancer also had an increased overall risk of dying.

Although this study does not specifically examine the reasons why people with psoriasis may be more likely to develop cancer, we can offer a few possible explanations. Psoriasis is an inflammatory condition involving overactive immune cells in the body. We know that other chronic inflammatory diseases, such as Crohn’s disease, are also associated with increased risk of developing cancers.

People with severe psoriasis often do not get enough relief with topical therapies (ones applied to the skin), such as topical corticosteroids and vitamin D analogues. They may then be started on medications that target specific immune cells and proteins. Some of these medications increase the risk of infections. Previous studies have found little to no increased risk of cancer in patients receiving these therapies. Other treatments, such as phototherapy (light therapy), are known to increase risk of developing skin cancers.

What can you do to reduce cancer risk if you have psoriasis?

Psoriasis remains one of the more common inflammatory skin conditions. This study does not suggest ways in which people with psoriasis may reduce their risk of developing cancer. But there are several lifestyle modifications that could help to decrease cancer risk while also benefiting your overall health.

For example, quitting smoking, drinking less alcohol, eating a healthier, well-balanced diet, and moderate physical activity may not only reduce your risk of developing cancer, but also may reduce your risk of cardiovascular disease. You should also work with your primary care physician to stay up to date with routine cancer screenings, such as colonoscopies, mammograms, and lung imaging.

Further studies are needed to determine the specific mechanisms underlying the potential link between psoriasis and increased cancer risk, as well as how specific lifestyle factors and medications may play a role.

Customers choose amazing colors for their Nissan GT-R50s by Italdesign

Trump is so much closer to impeachment