Breaking News
The Patch Tuesday focus for April: Windows and...
Iran nuclear: State TV names suspect in Natanz...
Meat-Lite Meatloaf
The crypto FBAR: Implications beyond By Cointelegraph
Queen sits on her own during Philip’s funeral
AI Weekly: Data analytics keeps attracting investment through...
Will longer pause on J&J’s COVID-19 vaccine help...
This is what we know about the shooting...
Katie Haun on saying yes to Coinbase and...
Authorities were warned about FedEx suspect’s potential for...
Home Business Police to provide more information on California shooting that left four dead, including a child By Reuters
Business

Police to provide more information on California shooting that left four dead, including a child By Reuters 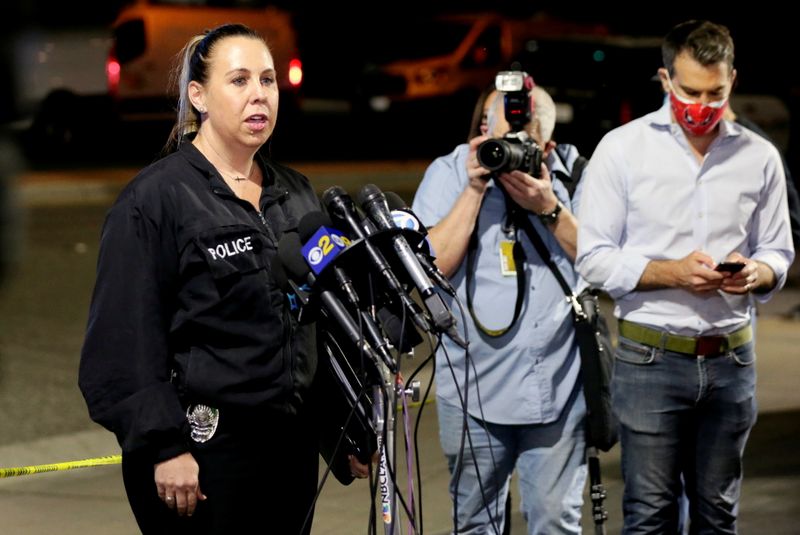 © Reuters. News conference about a shooting at an office building in Orange, California

(Reuters) – Authorities were expected to offer more information on Thursday on a shooting that left four people dead, including a child, on Wednesday at an office building in suburban Los Angeles before a suspect, wounded in an exchange of gunfire with police, was taken into custody.

The bloodshed in the city of Orange, about 30 miles (48 km)southeast of downtown Los Angeles, marked the third deadly mass shooting in the United States in less than a month. Authorities offered no explanation as to a possible motive. They have scheduled a briefing for later on Thursday.

Orange Police Department Lieutenant Jennifer Amat told reporters on Wednesday that police officers arrived on the scene at about 5:30 p.m. local time as shots were being fired and “engaged with the suspect.”

She said three adults and one child were found shot dead, and two other people struck by gunfire, including the alleged shooter, were transported to area hospitals.

The police department said in a message posted to its Facebook (NASDAQ:) page that the situation had since been “stabilized” with no further threat to the public.

The shooting erupted in a two-story office building that opens onto an inner courtyard ringed by several businesses. The larger neighborhood consists of homes, apartments and other commercial properties.

Officials had no further details of the incident immediately available.

The shooting came a little more than two weeks after eight people were shot to death by a gunman who went on a rampage at three Atlanta-area day spas on March 16.

Ten people were killed on March 22, when a man opened fire at a supermarket in Boulder, Colorado. The lone suspects in both those shootings were arrested.

“Mass shootings are the tip of the iceberg of this country’s gun violence crisis,” Shannon Watts, the founder of Moms Demand Action for Gun Sense in America, said in a tweet. “Tell your Senators to act. Now.”

US Coronavirus: Thousands of cases of a worrying variant have been reported in the US. These states have the highest numbers