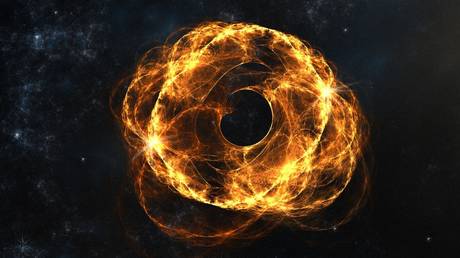 One of the leading theories about the origins of black holes suggests they come from gargantuan supernova explosions. New research suggests these blasts may be so powerful, they literally kick black holes around the galaxy.

If proven correct, this would mean that, throughout the galaxy and indeed the wider universe, there are likely millions of black holes bouncing around at fantastically high speeds of 70km/s (43 miles per second).

“This work basically talks about the first observational evidence that you can actually see black holes moving with high velocities in the galaxy and associate it to the kick the black hole system received at birth,” astronomer Pikky Atri of Curtin University and the International Centre for Radio Astronomy Research (ICRAR) said.

The study concentrated on 16 black holes in binary star systems as the gravitational force of a black hole is so strong that we can’t detect any electromagnetic radiation emanating from it unless we catch it feeding on something, like its binary partner, for example.

As the black hole consumes its stellar sibling, the matter being swallowed up emits powerful X-rays and radio waves, allowing Earth-bound scientists a chance to home in on them.

With the ability to track black holes, they began retracing their movements by reverse-engineering their velocities to understand where, and how, they originated, either by collapsing in on themselves without a supernova explosion or with a tremendous punt in a similar way as to what happens when neutron stars die.

Neutron stars experience what is known as a Blaauw kick or a natal kick, which sends them flying across the stars, so researchers wanted to determine whether the same could be true for black holes. They found that 75 percent of the black holes studied did indeed receive a swift kick up the backside the moment they were born.

We needn’t worry about the Earth getting smashed in the face by an errant cosmic free kick, however.

“It’s very, very far away. So there’s no chance that we’re getting sucked up by any black hole any time soon.”

With two microwaves, all power in the city would go down

Driving for teens with ADHD: What parents need to know – Harvard Health Blog