Breaking News
How to Stay Focused When Planning and Hosting...
How You Can Know if You Really Need...
A Close Look at the Top Uses and...
Startup Business Management: How to Effectively Avoid Common...
4 Steps to Taking Your Event Outdoors
Questions to Ask When Interviewing Potential Physicians for...
Cider-Braised Chicken & Mushrooms
Deadline extended for 100 Best Places to Work...
Trump impeachment: Senate leaders spar over trial
Trump faces impeachment on a grave day in...
Home World Mexico President Lopez Obrador tweets that U.S. Atty. Gen. Barr gets non-intervention in foreign policy
World 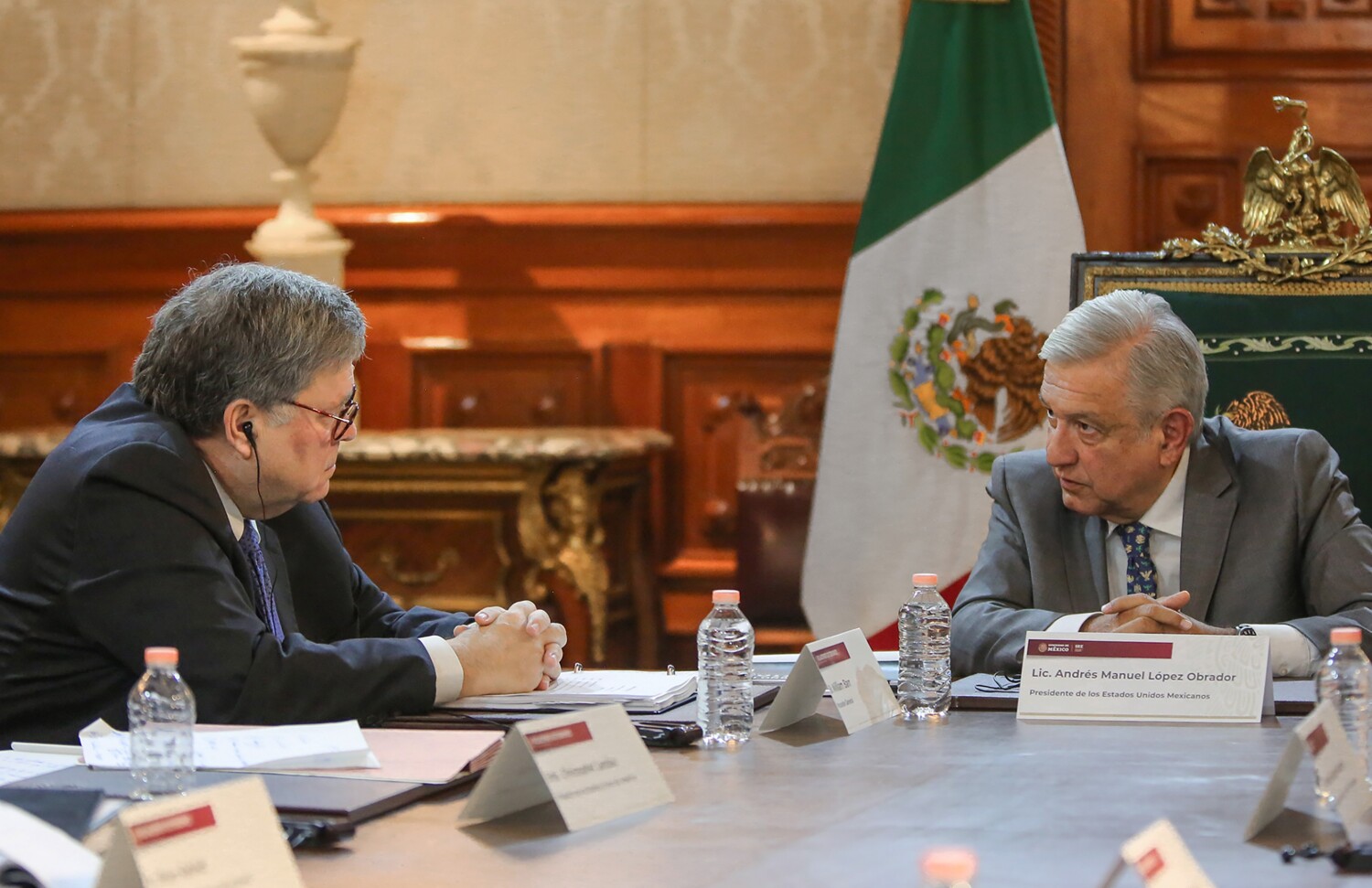 Mexican President Andres Manuel Lopez Obrador on Thursday said visiting U.S. Atty. Gen. William Barr understood the importance of nonintervention in foreign policy, but there was no public indication that the two nations had resolved deep differences about the Trump administration’s plans to classify Mexican drug cartels as terrorist organizations.

President Trump’s statement late last month that Washington planned to designate the cartels as foreign terrorist groups sparked profound opposition in Mexico, where many view the idea as opening the door to direct U.S. intervention — while sullying Mexico’s international image and possibly damaging trade and tourism.

In a Twitter message, Lopez Obrador described the session with Barr as a “good meeting” and signaled that the top U.S. law enforcement official was aware of domestic sensitivities on the issue.

“As a lawyer, [Barr] understands that our constitution mandates that we adhere to the principles of cooperation for development and nonintervention in foreign policy,” wrote Lopez Obrador, a leftist who has sought cordial relations with the Trump White House. “This way we will always be able to work together.”

In a statement, Mexico’s foreign secretariat said that officials from the two countries engaged in a “cordial and respectful” conversation about various security topics, including “arms trafficking, money laundering … and how to confront together transnational crime and the international trafficking of drugs.”

There was no immediate word from U.S. officials on the meeting, which reportedly lasted 45 minutes and also included other high-level U.S. and Mexican officials, including Marcelo Ebrard, Mexico’s foreign secretary, and Christopher Landau, Washington’s ambassador to Mexico City.

The planned designation that Trump disclosed in a radio interview is meant to disrupt financing and other aid for targeted groups through sanctions. His announcement came weeks after gunmen believed linked to traffickers killed six women and three children — dual citizens of the U.S. and Mexico — in an ambush in northern Mexico. Those killings and others have emphasized Mexico’s soaring homicide rate, much of it linked to organized crime, which controls the lucrative trafficking of drugs to the United States.

If designated, Mexican drug gangs would join dozens of other international organizations on similar blacklists, including Islamist, separatist and other factions with more overtly political goals than Mexican drug syndicates — which, while extremely violent, operate on a for-profit principle.

Trump’s comments immediately caused a furor in Mexico, where the history of past U.S. interventions— and of losing much of the country’s national territory in a disastrous 19th century war with the United States — are stressed in standard school texts.

“Cooperation yes, intervention no,” has been Lopez Obrador’s response to the Trump plan.

Lopez Obrador, who took office last year, has worked closely with the Trump administration on a number of thorny issues, notably trade and immigration. He has repeatedly praised Trump and veered away from direct confrontation with Mexico’s giant northern neighbor and key trade partner.

Many in Mexico fear that Trump’s move may have more to do with bolstering support among his domestic base in next year’s elections than with efforts to stem drug violence in Mexico. During his presidential campaign, Trump was widely assailed for perceived Mexico bashing as he promised to build a wall along the two nations’ border, assailed bilateral trade relations as unfair to the United States and categorized many Mexican immigrants in the United States as criminals.

It was also unclear how exactly Mexico would benefit from the designation of drug cartels as terrorist groups. Mexico already cooperates with the Drug Enforcement Administration and other U.S. law enforcement agencies in the anti-drug fight, and Mexican authorities point out that most illicit drugs are headed for the voracious U.S. market.

The United States is also the source of much of the weaponry used by Mexican drug gangs. Mexico’s former, heavily militarized war on drugs is widely regarded as a failure, and many experts say institutional reforms such as ending corruption among police forces, politicians and the judiciary are key to defeating cartels.

“I do not accept the terminology narco-terrorism,” Olga Sanchez Cordero, Mexico’s interior secretary, told reporters this week. “Yes, we have organized crime, we have drug cartels, but all in the category of criminality, not narco-terrorism.”

Many in Mexico also fear that the designation could harm international trade and tourism, linchpins of the Mexican economy.

“Many American businesses … won’t want to do business in Mexico for fear that there will be a declaration from the United States that they are doing business with people from the cartel,” Luis Ernesto Derbez, a former foreign secretary, told reporters last week. “That will reduce investment and the attraction of Mexico.”

Times staff writer Tracy Wilkinson in Washington and Cecilia Sanchez of The Times’ Mexico City bureau contributed to this report.

Customers choose amazing colors for their Nissan GT-R50s by Italdesign