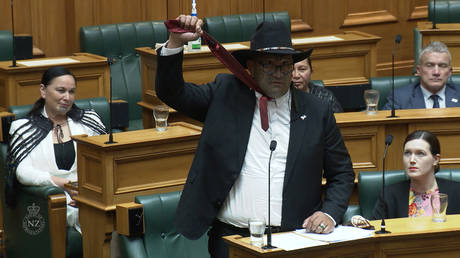 Maori Party co-leader Rawiri Waititi was ejected from New Zealand’s parliamentary chambers after accusing a fellow MP of engaging in racist rhetoric, and then performing a ceremonial dance to express his displeasure.

Waititi took offense after National Party leader Judith Collins pressed Prime Minister Jacinda Ardern about the government’s plan to introduce a separate health service for indigenous people. The initiative has been billed as an attempt to improve the quality of medical care for the Maori community. Debate over the controversial changes has raged for several weeks, with Collins accusing the government of promoting a “separatist agenda” that was being introduced “by stealth.”

He argued that views on indigenous rights should only come from members of the Maori community, adding that non-indigenous people should stay in their lane.

“If we find this attitude acceptable in this House, the constant barrage of insults to tangata whenua, then I find this House in disrepute,” he said, using the Maori term for indigenous people.

Mallard then called for order, adding that Waititi’s microphone had been turned off. It was then that Waititi launched into a Haka, a ceremonial dance of the Maori that can be used to issue a challenge. Dressed in a pink blazer and wearing a cowboy hat, the politician planted himself in front of his desk as he began to loudly chant.

The frustrated House speaker then ordered the MP to leave the chamber.

Waititi later told the media that Collins was “bashing” the Maori in order to gain the votes of her non-indigenous constituents.

This isn’t the first time that Waititi has caused a ruckus in parliament. He was ejected from the House in February for not wearing a necktie. He defended his decision by claiming that the garment was a “colonial noose,” choosing instead to wear a traditional Maori necklace. New Zealand’s parliament later scrubbed the tie requirement from its dress code.

Also on rt.com
New Zealand wants to ban cigarette sales to anyone born after 2004 as part of plan to make nation ‘smoke free’ by 2025