More than 1,550 hurricane evacuees are aboard a cruise ship from Freeport in the Bahamas that’s heading to West Palm Beach in Florida, according to a Facebook post from the Bahamas Paradise Cruise Line.

People are already waiting at the Port of Palm Beach in hopes of reuniting with their family members.

Garrise Newbold, who lives in Georgia, is there with her four-year-old son. She’s hoping to reunite with about six relatives, including her grandmother and her great-grandmother. Her family had been without water and electricity for a while, Newbold said, so when she heard there would be a cruise ship helping to evacuate people from the Bahamas, she made sure the word got to her family members.

Newbold said her family members joined a long line of people early in the morning to board the ship in Freeport. Luckily, they managed to get on.

Weak phone connections have made it tough to communicate, Newbold said, so she’s only managed to speak to her relatives every two days or so.

“It’s been very stressful,” she said. “We just didn’t know. The thought of not knowing anything is the most difficult part.” 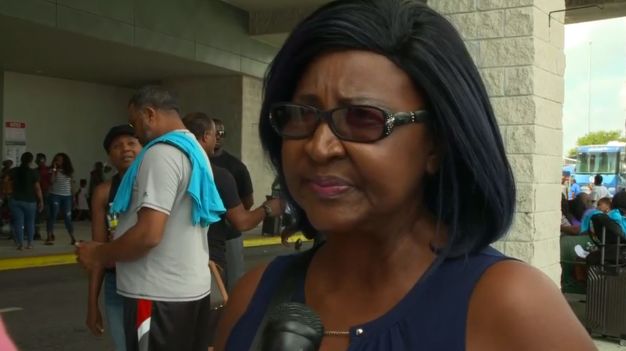 Daisy Rolle is at the port in search of her sister Loretta Rahming.

Rolle said her sister had been staying at an assisted living center on the island of Bimini ever since she suffered a stroke about two years ago and was being tended to by a caretaker. Rolle said she spoke to her sister’s caretaker on Monday, a day after the storm hit, but hasn’t been able to make contact since then.

“I’m worried because I desperately need to hear if she is okay,” Rolle said. “I need to get her over there because she had a stroke two years ago and she cannot do anything for herself. If she can get around family members, we can take better care of her.”

Rolle said she has been reaching out to people from the island of Bimini, where she is from, to see if they can check on her sister, but that they’ve had difficulty accessing the home due to the damage and debris from the storm. So now, all Rolle can do is wait.

Atlas push to ‘slow the testing down’ tracks...

Trump bet against science, and voters are casting...

Jared Kushner bragged in April that Trump was taking the...