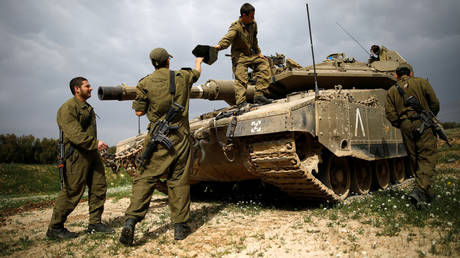 An Israeli tank operator has “accidentally” fired a shell into the Gaza Strip, the IDF said, noting it would launch a probe into the incident, the second mishap involving “unauthorized” tank fire in a matter of weeks.

The inadvertent shelling came during a mission “to increase operational employment” near the Palestinian enclave on Monday, the Israeli Defense Forces said in a statement, adding that “the incident is being investigated.”

The munition struck an “abandoned structure” and inflicted no casualties, according to a local report.

An unconfirmed image circulated on social media by a photojournalist in Gaza, Ahmed Al-Maqadma, showed a dilapidated structure with a square hole punched in its wall alongside a small pile of rubble. Al-Maqadma noted the building was an “abandoned house” east of Juhr al-Dik, a small village in central Gaza.

The bombing comes less than a month after another “misunderstanding” near the Gaza border on November 21, which saw an IDF tank open fire on a “Hamas observation post” without authorization. The military said the illicit shelling was the result of miscommunication “between commanders on the radio,” adding at the time that the shelling would be investigated. No casualties were reported in the earlier incident.

Hamas, too, has reported an accidental weapons discharge in recent weeks, with an equipment malfunction triggering rocket fire in mid-November. The IDF ultimately concluded the incident was a mistake caused by lightning and extreme weather conditions, coupled with faulty rocket launchers.

Tel Aviv routinely carries out what it deems retaliatory operations in Gaza, including air and ground raids, in response to projectiles fired from the enclave. The vast majority of the rocket attacks are intercepted by Israel’s missile-defense system, the Iron Dome, before they can reach a target.

US presidential election timeline: Congress has the next — and final — vote. Here’s how it works