GOP suggests Supreme Court, on brink of 6-3 majority, may not strike down Obamacare after all 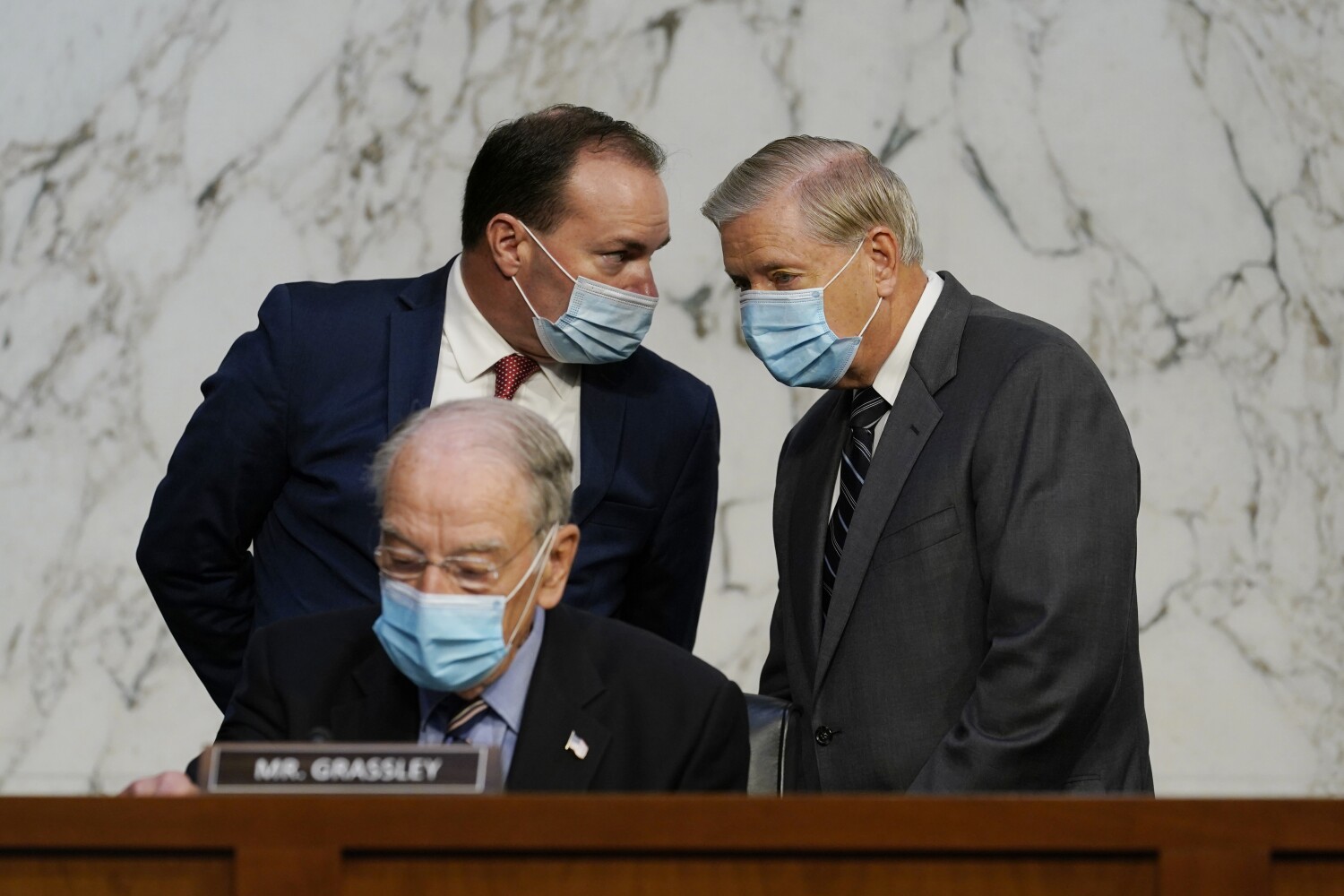 As healthcare plays an increasingly prominent role in the closing days of the 2020 election, Republicans are trying to raise doubts in voters’ minds that a GOP-backed lawsuit asking the Supreme Court to strike the entire Affordable Care Act will actually succeed.

She repeatedly suggested — in response to Republicans’ often leading questions — that despite her past criticisms of the 2010 law, she may not support striking the entire law, one of the only issues on which she came close to offering a view of her thinking.

The campaign by congressional Republicans to downplay healthcare fears belies a decade-long GOP effort to repeal the law known as Obamacare, including two previous Supreme Court challenges that failed.

The third major effort is to be heard a week after the election and could be the first argument with Barrett on the court. GOP-led states and the Trump administration are arguing that the entire law — including the popular protections for people with preexisting medical conditions — should be wiped off the books because one provision is no longer valid.

While Republicans in Congress have not formally joined the latest lawsuit, they have a long history of voting to repeal the Affordable Care Act.

Now with the election closing in and polls suggesting Democrats are ahead in many races, Republicans are struggling to convince voters that the Supreme Court won’t do exactly what the Trump administration is asking it to do.

Senate Majority Leader Mitch McConnell (R-Ky.) said this week in a debate that “no one believes the Supreme Court is going to strike down” the healthcare law. In a Montana debate last month, Republican Sen. Steve Daines cited “experts” who say it is “highly unlikely” the Supreme Court will overturn the Affordable Care Act.

“Put down the bong,” he said on Fox News. “Americans don’t believe that. My [Democratic] colleagues think Americans are morons.”

Democrats argue that Barrett’s appointment will make it more likely that the law is struck down, pointing to her past skeptical comments of Chief Justice John G. Roberts Jr.’s two opinions upholding the law. She said during the hearing that those criticisms are irrelevant to the current case because the issues are different.

Sen. Charles E. Grassley of Iowa said last month that he has “doubt” that the law will be struck down “whether [Barrett] is on the court or not,” according to the Cedar Rapids Gazette.

The popularity of the healthcare law — particularly its requirement that insurance companies accept anyone, regardless of their preexisting conditions — has reemerged as a top vulnerability for Republicans. Democrats, who won control of the House on the issue in 2018, have returned to healthcare, using the Supreme Court confirmation hearing as their platform. They charge that Trump wants Barrett confirmed by the Nov. 10 argument to ensure that she will vote against the law.

Since the Republican Party’s 2017 unsuccessful repeal effort, GOP lawmakers have embraced the idea of the law’s protections for people with preexisting medical conditions, but not the policy as it is written in the Affordable Care Act. They accuse Democrats of trying to frighten voters before the election.

Democrats “assert everyone with preexisting conditions is going to be denied healthcare and people will be dying in the streets. And I get that is their reelection message. It’s not actually connected to reality,” said Sen. Ted Cruz (R-Texas). “Every member of the Senate agrees we are going to protect preexisting conditions.”

While there are several Republican ideas on how to address preexisting conditions protections, the party has not coalesced around a plan to ensure those protections would continue if the court were to strike the law. One GOP idea would prevent insurance companies from denying customers with preexisting conditions if those customers have maintained consistent insurance coverage. Skeptics of this plan say that if a person drops out of the insurance market, it could be prohibitively expensive to get back in. Another GOP proposal says insurance companies must accept anyone, but can charge more to women and older adults.

In reviewing the case, the Supreme Court will have to decide whether the law’s requirement that nearly all Americans have insurance — the so-called individual mandate — is now invalid because Congress made the penalty $0. If the justices invalidate it, they will then have to determine if the mandate is “severable” from the rest of the law or whether the entire law needs to be taken down. Democrats defending the law say even if the court rules the mandate is unconstitutional, the rest of the law can stand.

Senate Judiciary Committee Chairman Lindsey Graham, who suddenly finds himself in a close reelection contest in South Carolina, explicitly addressed conservative voters in Barrett’s hearing Wednesday on the issue. Graham asked Barrett to confirm that the most important issue in determining “severability” is a “presumption to save the statute, if possible” by removing only the offending provision and leaving the rest in place. She agreed.

“So I want every conservative in the nation to listen to what she just said,” Graham said. “The doctrine of severability presumes, and its goal is, to preserve the statute if that is possible.”

“Severability strives to look at a statute as a whole and say: Would Congress have considered this provision so vital that — kind of in the Jenga game — pulling it out, Congress wouldn’t want the statute anymore?” Barrett said.

While Graham wanted to ensure that the public had the impression that Barrett would not eliminate preexisting conditions protections, his opposition to the rest of the law is intact.

“We started with five exchanges. We’re down to one. You have one choice. Four rural hospitals have closed,” he said of the law in South Carolina. “Premiums have gone up, not down, by an average of 30%.

Democrats have been unusually disciplined in their focus on the healthcare law in the Barrett hearings. She has refused to weigh in explicitly on how she views the case, outside of the severability question. But in response to intense questioning by Democrats, she said she is not “hostile” to the law.

“I’m not here on a mission to destroy the Affordable Care Act,” she said.

Barrett even acknowledged that she had concluded in a mock court exercise last month that the mandate is invalid, but that the rest of the law can stand without it. Though she cautioned that may not reflect how she would rule if on the high court, Republicans framed the exercise as a “clue” of her opinion.

The mock ruling, Sen. Mike Crapo (R-Idaho) said, provides an “answer, frankly, to a lot of those raising this specter that you’re going to take the whole Affordable Care Act away from everyone because of this very narrow case.”

“It is not at risk in the Supreme Court case, as you have, I think, very clearly described in your testimony,” he said.

Such a characterization, however, went further than Barrett’s actual comments.