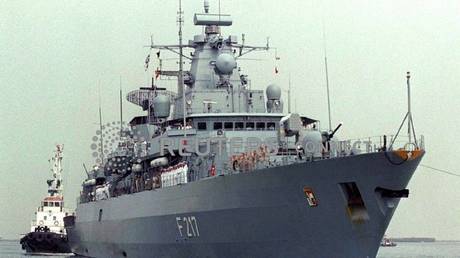 A German frigate has set sail for the South China Sea for the first time in some two decades as part of a six-month mission, as Berlin pledges its commitment to its allies and to ‘freedom of navigation’.

One of Germany’s four Brandenburg-class frigates, the Bayern (Bavaria), departed the German naval base of Wilhelmshaven on Monday during a ceremony attended by Defense Minister Annegret Kramp-Karrenbauer.

The military vessel carrying 46 anti-submarine torpedoes, as well as anti-ship missiles and anti-aircraft weapons, will spend the next six months at sea and is expected to sail near the Horn of Africa, Australia, and Japan, according to the German Navy.

“Together with its allies, Germany wants to show more presence in the Indo-Pacific [region],” the navy’s statement said. It is expected to sail through the South China Sea – a region where tensions between Washington and Beijing are running high.

The waters of the South China Sea have long been a stumbling point in regional territorial disputes. Beijing maintains that it has a historic right to the waters, but its territorial claims covering most of the sea have been denied by the Permanent Court of Arbitration in The Hague, which ruled in favor of the Philippines.

The US military has also made its presence known in the resource-rich region under the pretext of maintaining stability and protecting “freedom of navigation.” Most recently, Washington hinted it would rally its allies to its cause in the South China Sea, with US Secretary of State Antony Blinken saying his country would stand alongside others in facing up to Chinese “coercion.”

The navy’s statement, which presents the whole mission as an “ordinary presence-and-training voyage,” does not mention China or the South China Sea by name. It does say, though, that the Indo-Pacific area is “the most strategically important region on earth,” where “important decisions are made about freedom, peace and prosperity.”

It also said that the goals set by the German government for the navy’s increased presence in the region include enhanced international cooperation, support for some “local partners,” and maintaining the “rules-based maritime order.”

“It is about flying the flag and demonstrating on the spot that Germany is on the side of its international partners that share the same values [of] the freedom of sea routes and compliance with the international law,” German Navy commander Vice Admiral Kay-Achim Schoenbach said at the departure ceremony. He also said that the mission would see the German warship monitoring the enforcement of the UN sanctions against North Korea and “strengthening the UN as a whole.”

The navy said that German warships have not taken part in any such large-scale maritime missions since 2016. However, the media reports noted that Berlin has not sent its military vessels to the South China Sea for at least two decades.

Bayern begins its voyage with tensions in the region already running high. In late July, Beijing slammed the fact that a US Navy guided missile destroyer crossed the Taiwan Strait in the South China Sea – for the seventh time this year.

The move prompted the spokesman for the Chinese People’s Liberation Army Eastern Theater Command, Colonel Shi Yi, to call the US “the biggest destroyer of peace and stability” in the region.

The German vessel is not expected to take any particularly provocative routes in the South China Sea, according to Reuters. The news agency reported the warship would stick to the common trade routes and avoid the Taiwan Strait.

Also on rt.com
‘Biggest destroyer of peace’: China lashes out after US Navy warship sails through Taiwan Strait for SEVENTH time under Biden