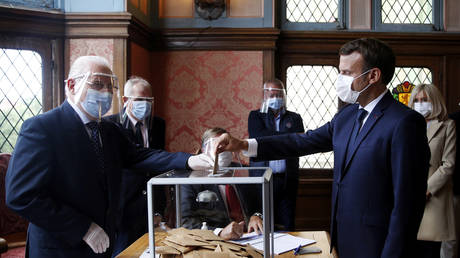 Officials are proposing to extend a state of emergency to February 16, thus retaining its power to extend curfews already in place in the largest French cities. Several more regions look set to enter red-alert status over Covid-19 in the coming days.

The decision on the upcoming elections will be made after a meeting between PM Jean Castex and representatives of the political parties, according to Attal.

Also on rt.com
Marseille to set up own Covid scientific council in a protest over ‘dependency’ on Paris scientists

However, the head of the French lower house of parliament, Richard Ferrand, spoke earlier on Wednesday in favor of delaying both regional and departmental elections slated next March due to the pandemic. “It would be wise to postpone them,” Ferrand told BFMTV.

The first round of the municipal elections took place in March this year, in the midst of the pandemic, and Ferrand pointed out that elections are not solely held on polling day but also involve meetings and door-to-door campaigning.

Opponents say that democracy should not be put on hold, but many local leaders support calls for the postponement. The presidents of seven regional departments said in an open letter last week that the elections should be pushed back by three months. The municipal elections in March were chaotic, and “the same scenario is likely to occur again,” the letter reads.

“The idea is to get through this crisis and perhaps in June the conditions for an electoral campaign will be better,” Nicolas Lacroix, president of the in Haute-Marne Departmental Council, told AFP. Elected officials should deal with the health crisis first, and they are unwilling to talk about the campaign at this stage, he added.