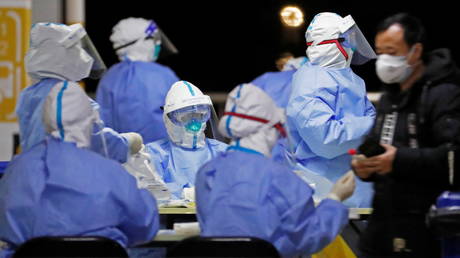 Shanghai’s Pudong International Airport descended into mayhem after Chinese health authorities ordered all cargo workers at the air hub to be tested for coronavirus, leading to a standoff between officials and angry staff.

The airport’s cargo handlers were corralled in a nearby parking lot to undergo an unannounced testing regime, reportedly after several of their colleagues and close contacts were found to be positive for Covid-19, the Global Times reported.

The sudden decision initially sparked frustration and anger, with videos posted to social media showing workers trying to push their way past personnel in hazmat suits. In several clips, huge crowds of people were seen shoving against a thin line of individuals dressed in personal protective gear, amid ceaseless shouting.

Wild scenes at Shanghai Pudong airport – multiple vids going around of what appears to be a sudden decision by authorities to test all staff for #COVID19 after 2 positive cases detected. Reports say authorities ultimately relented as things were getting out of hand. pic.twitter.com/Xenus4dHPR

However, it appears that authorities eventually restored order, with state media publishing photographs of workers waiting in line to be tested. More than 17,700 people had been screened for the virus by Monday morning, state-run Xinhua news agency reported, with 11,500 negative results so far.

Shanghai Pudong International Airport is arranging nucleic acid testing for relevant staff after three male employees at its cargo terminal tested positive for #COVID19. Temporary detection sites were set up overnight at the airport and employees were seen lining up for swabbing. pic.twitter.com/kOEg61RHpU

China has carried out mass-testing programs before. It screened nearly the entire population of Wuhan, where Covid-19 was first detected, after the city of 10 million people emerged from lockdown in April.

US Solar Companies Rely On Materials From Xinjiang,...

A Global Tour of a Record-Hot Year