Breaking News
Audi A6 E-Tron concept is a sleek EV...
US Coronavirus: In the race between Covid-19 vaccines...
South Africa: Cape Town fire damages nearly 200-year-old...
Covid-19 vaccine demand is slowing in parts of...
The Oscars Are a Week Away, but How...
Best Photo Stories On Black Lives Matter, COVID,...
Feeling Lonely in a Relationship: What You Can...
Gujarat sees highest 10,340 COVID-19 cases in day;...
What to do during an active shooter situation:...
How cancer put me off joining Amazon union
Home World As Beijing seethes, protesters celebrate Trump signing Hong Kong act
World 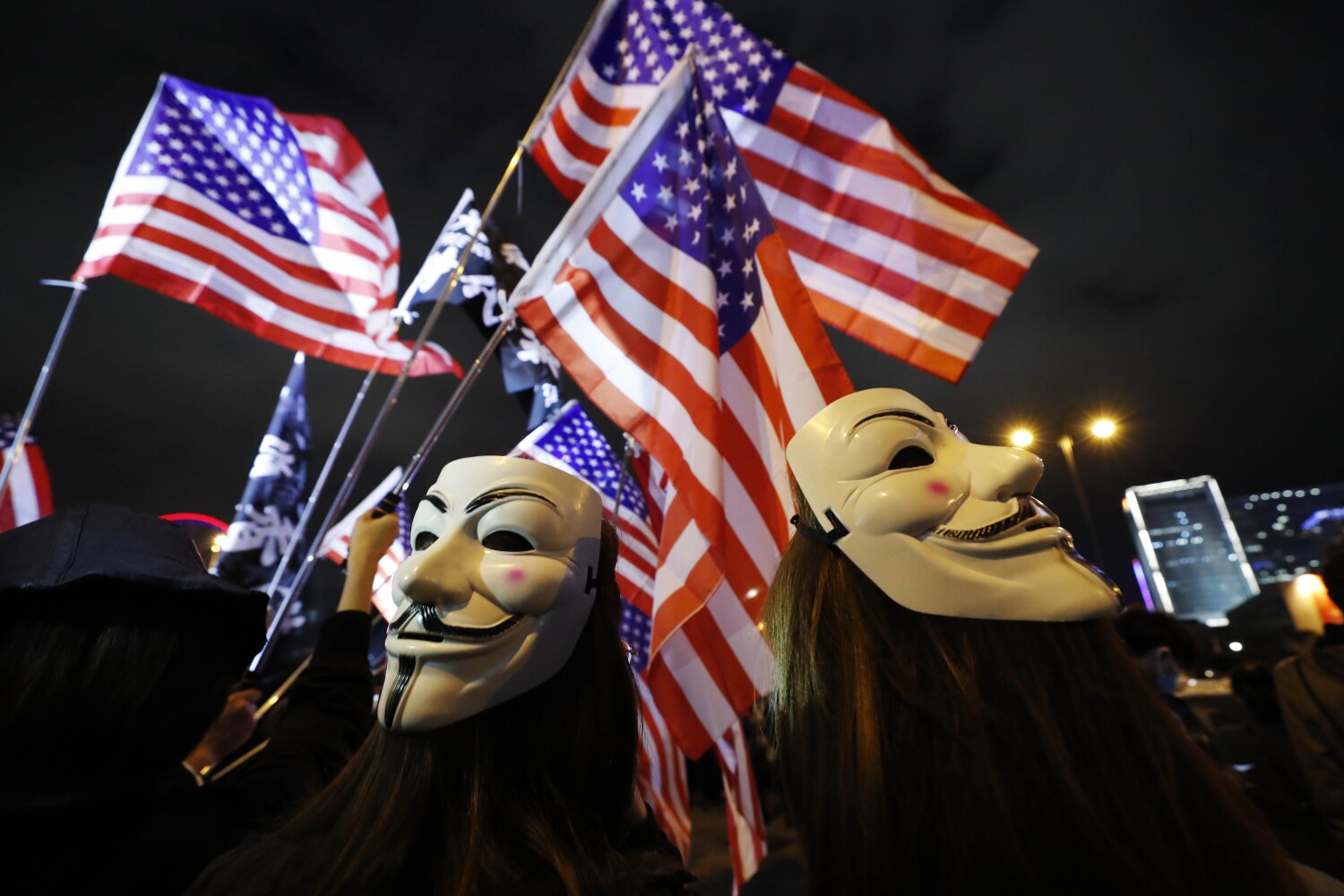 Dozens of American flags fluttered in the wind on Thanksgiving night in Hong Kong as thousands gathered at a rally in appreciation of the U.S. passage of two bills supporting human rights in Hong Kong that were signed into law by President Trump.

As a man sang “The Star-Spangled Banner,” a sea of cellphone torches lighted up the spaces between glittering skyscrapers in the city’s financial district. The crowd waved banners bearing the protest slogan: “Liberate Hong Kong, revolution of our times.”

“I guess Trump wanted to give us a Thanksgiving present, and we’re glad to accept,” said Wong Yiu-Chung, a professor of politics at Lingnan University in Hong Kong who was attending the rally with his wife.

Wong said Trump likely signed the bill for his own benefit. “But sometimes interests coincide,” he said. “This act gives us a lot of hope.”

President Trump signed the Hong Kong Human Rights and Democracy Act into law on Wednesday, mandating an annual review of whether Hong Kong retains enough autonomy to justify its special trade status with the U.S. The semi-autonomous Chinese territory has separate legal and economic systems as a result of its history as a British colony.

“I signed these bills out of respect for President Xi, China, and the people of Hong Kong,” Trump wrote in a statement. “They are being enacted in the hope that Leaders and Representatives of China and Hong Kong will be able to amicably settle their differences leading to long term peace and prosperity for all.”

Analysts say the new laws are mostly symbolic and unlikely to result in actual sanctions or a change in Hong Kong’s status anytime soon.

Much of what the law says is redundant, said Julian Ku, a law professor at Hofstra University, because the president already has powers to impose targeted sanctions on human rights offenders. The new law has stronger language in saying he “shall” sanction them but leaves the president with the authority to determine who qualifies as an offender.

It’s also unlikely that immediate changes will happen regarding Hong Kong’s trade and investment status, as threatened in the act if the territory is deemed insufficiently autonomous.

That would hurt mainland China, which relies on Hong Kong as a financial hub whose rule of law allows connections to outside investors wary of China’s ambiguous system — but it would also hurt U.S. and Hong Kong interests.

“At the end of the day, both Beijing and Washington, and Hong Kong people, want to maintain the status quo regarding the customs territory,” said Willy Lam, a professor at the Chinese University of Hong Kong’s Center for China Studies.

Targeted sanctions on individuals such as Hong Kong Chief Executive Carrie Lam, the police commissioner or mainland Chinese officials could send a stronger message without harming the economy. But Lam said Trump was unlikely to pursue them because of his interest in negotiating a U.S.-China trade deal.

“He doesn’t want to go too far in antagonizing the Chinese,” Lam said.

Nevertheless, the law’s near-unanimous passage through both houses of Congress, together with the victory of Hong Kong’s pro-democracy camp in recent local elections, are a vindication for the protesters.

“They have won a very important moral victory,” Lam said.

For months leading up to local elections, Hong Kong and Beijing authorities had condemned protesters, speaking of a “silent majority” in Hong Kong that wished for an end to unrest and would ostensibly come out to vote for pro-establishment candidates last week. The elections proved them wrong.

“When I heard Donald Trump had signed the act this morning, I was so happy,” said a 40-year-old woman attending the rally with her two children. She withheld her full name out of fear or reprisal by authorities. “The election proved that we are the majority, and now this shows that we are supported around the world as well.”

Chinese officials fired off a flurry of angry statements Thursday, condemning the new law as an act of foreign intervention aimed at containing China’s growth and “an epitome of gangster violence,” in the words of the Chinese Foreign Ministry Commissioner’s Office in Hong Kong.

“Facts have proven that the United States is the biggest culprit in disrupting Hong Kong,” said the Hong Kong and Macau Affairs Office of China’s State Council in a statement, which said “all Chinese, including Hong Kong people” were against the act.

The Ministry of Foreign Affairs summoned the U.S. ambassador to China and suggested coming retaliation in a statement: “We urge the U.S. to not continue going down the wrong path, or China will take countermeasures, and the US must bear all consequences,” it said.

But China’s options for retaliation beyond rhetoric are limited, in part because Beijing badly wants and needs a trade deal.

China could also target U.S. companies seen as supporting Hong Kong protests or refuse to make trade concessions, but both are actions China was already taking.

Chinese state media outlets were careful to blame members of Congress rather than President Trump for the law. The Global Times, a hawkish state-run publication, cited several Chinese academics implying Trump had no choice but to sign the bill.

“Trump lacks the political power to veto the bill,” one said. “Trump is dissatisfied with politicians in Congress,” said another. The state-run People’s Daily wrote that “the U.S. Congress, full of evil intentions, is trying to stir up troubles” and that “some American politicians” were trying to destabilize Hong Kong.

Wang Yong, professor of international studies at Peking University, said the focus on Congress rather than Trump was a sign of Chinese authorities’ desire to leave space for a trade deal despite political tensions over China’s policies in Xinjiang and Hong Kong.

“China will try not to let the Hong Kong problem and other tensions affect the trade deal. They try to handle it by separate tracks,” he said. “Right now the leaders, including Chinese leaders and Trump and negotiators, all have this way of thinking, to keep trade separate from politics. … China will keep trying to make a deal.”

Wang also agreed that the new act was mostly symbolic, which meant China was also unlikely to take real retaliatory action against the U.S.

What’s more likely is that Beijing will take out its anger on Hong Kong, enforcing stricter control over policies, trying to change the education system and pushing for stronger national security laws, as called for in a recent meeting of the Communist Party’s Central Committee.

That sets the stage for further conflict, as newly emboldened protesters, backed up by Western support, face off with a hardened Chinese leadership.

Thursday’s rally was peaceful but ended in clashes again as dozens of riot police appeared at the rally’s exit route. Rally attendees shouted at the police, who then charged and arrested at least one person and injured at least one other.

“Enforcement of the act can’t come soon enough,” said pro-democracy legislator Ray Chan. “With sanctions in place, the police will no longer act with impunity.”

Chan said he hoped other countries including the United Kingdom and Canada and members of the European Union would introduce their own versions of the law.

“They send a strong signal that Hong Kongers are not alone,” he said.

Get smart on impeachment before Thanksgiving dinner

When Is a Star Not Always a Star? When It’s an Online Review