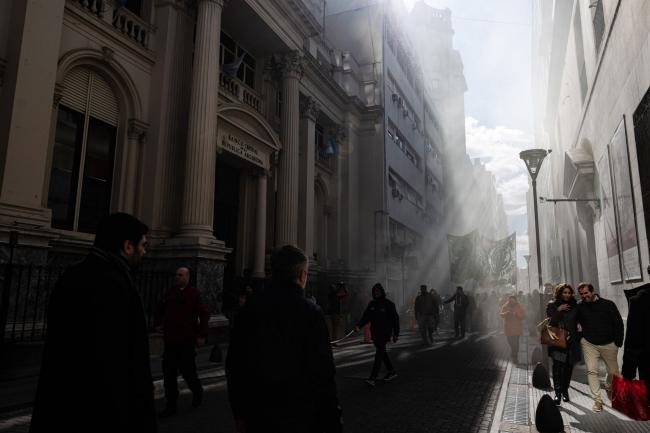 (Bloomberg) — After a brief respite at the end of last week, Argentina’s debt is getting hammered again.

The nation’s offshore notes approached new lows on Monday, close to wiping out the small rebound from late last week, after the country was downgraded deeper into junk territory by two of the three biggest ratings companies and the Economy Minister Nicolas Dujovne resigned.

The extra yield investors demand to own Argentine bonds over U.S. Treasuries widened 205 basis points to 18.58 percentage points, according to a JPMorgan (NYSE:) index, while 100-year securities fell 4.7 cents to 47.4 cents on the dollar, approaching last week’s record low. The upfront cost to protect Argentina’s debt for five years using credit default swaps rose to 52% from 47% on Friday. Local markets are closed on Monday for a holiday.

“You’re going to see plenty more volatility between now and the end of October,” said Graham Stock, a senior emerging-market sovereign strategist at BlueBay Asset Management in London. Measures taken by President Mauricio Macri last week “won’t be enough” to help him in the Oct. 27 election, and he risks pursuing “too populist an economic agenda” in the lead-up to the vote, Stock said.

Macri’s measures to support the economy include freezing fuel prices for 90 days, increasing the minimum salary and modifying taxes paid by workers.

Despite a two-day respite at the end of last week, the nation’s credit default swaps still imply a 86% chance of a default in the next five years amid expectations the populist opposition will win October’s election. The brutal slump in the peso made the country’s large pile of debt much harder to repay. As of March 31, Argentina had $33.7 billion in foreign-currency debt payments due by year-end, the vast majority in short-term Treasury bills.

In an interview on Bloomberg TV, Alejo Czerwonko, an emerging-markets strategist at UBS Wealth Management, said a surprise in the first round for Macri would bolster assets, but that it was very unlikely. Argentines vote in presidential elections on Oct. 27 and the next government would take over on Dec. 10.

The sharp market sell-off was prompted by a surprise result in the Aug. 11 primary election showing opposition candidate Alberto Fernandez with a commanding lead over Macri.

A delegation from the International Monetary Fund is expected to arrive in Buenos Aires this week for meetings with the government and the opposition ahead of a decision on whether to disburse about $5 billion of additional funds next month. The nation’s reserves fell $3.9 billion last week to $62.4 billion, the lowest since December, aggravating concerns about the country’s finances.

In several interviews with local newspapers on Sunday, Fernandez spoke about what he considered successful debt talks during his time as cabinet chief that led to a restructuring of bonds and the need to negotiate with bondholders. While he didn’t say he would necessarily push for a restructuring he said that “no one knows better than us the damage caused by default.” On Monday, his economic adviser, Guillermo Nielsen, said Fernandez has no plans to restructure the country’s debt.

“While he added some clarity on his views, he did not shed any light on future cabinet members, which would be necessary to understand his economic policies more concretely,” Citigroup Inc (NYSE:). strategists led by Dirk Willer wrote on a report on Monday.

Late last week, Fitch Ratings cut Argentina’s long-term issuer rating to CCC from B, putting the South American nation on par with Zambia and the Republic of Congo. S&P followed, lowering the country’s sovereign rating to B- from B and slapping a negative outlook on it.

“Uncertainty continues on the private sector’s predisposition to roll over government debt and hold pesos while depreciation stresses the government’s high financing needs,” S&P analyst Lisa Schineller wrote in a statement accompanying the downgrade. Fitch’s said the deterioration in the macroeconomic environment “increases the likelihood of a sovereign default or restructuring of some kind.”

A Mississippi church counts its missing after ICE raids

Greenland: At the bottom of a glacier, scientists find troubling signs